A couple of weeks ago I posted about our hike to Mill Creek in the town of Narrows.  We took the trails to Sentinel Point, it was a gorgeous day and we had an excellent view.  But there are other trails that we decided needed exploring as well.  So yesterday, we set off to hike Pearis Mountain.

Starting out on the Buttercup trail, it begins as a gentle incline and you can tell there was once a road there.  Don’t get too comfortable, the trail quickly becomes steep and rocky with at least 6 switchbacks as you start to climb for about 2 miles. 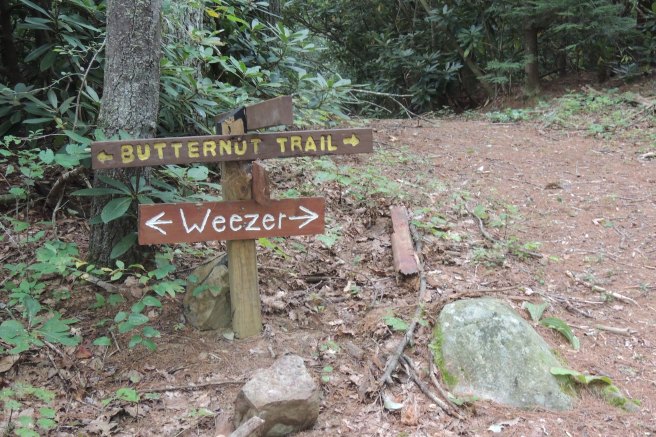 And just in case you are confused if it’s still a road, there was this helpful sign.

As I mentioned in the last post, this area is mostly known to locals – in other words the local college students have not yet discovered it.   We saw other hikers from the parking lot, but other than a father and son, we had this particular trail to ourselves.

I started out kind of sluggish yesterday, not sure why.  Perhaps I was missing the sunshine that had been promised.  I was always lagging behind JG, but he would patiently wait for me to catch up.

We caught a glimpse of Sentinel Point on the way up. 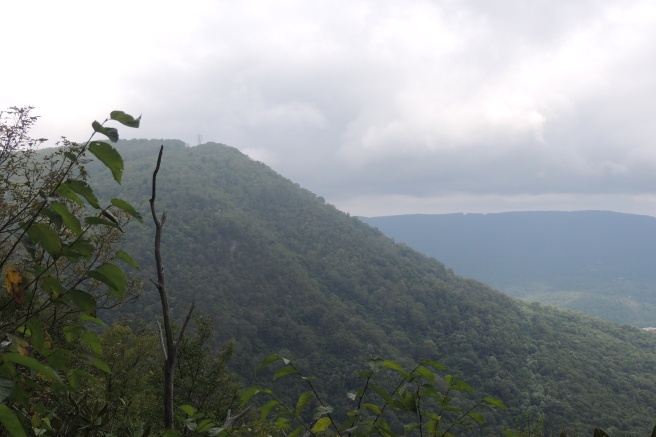 You can see the weather was not the best.  In fact we were sprinkled on a couple of times, and as we walked the ridge on top of the mountain, the wind was quite cool.

The second trail, Mercy Branch was about 2 miles long.  It was mostly level, very soft surface but lots of overgrown vegetation. 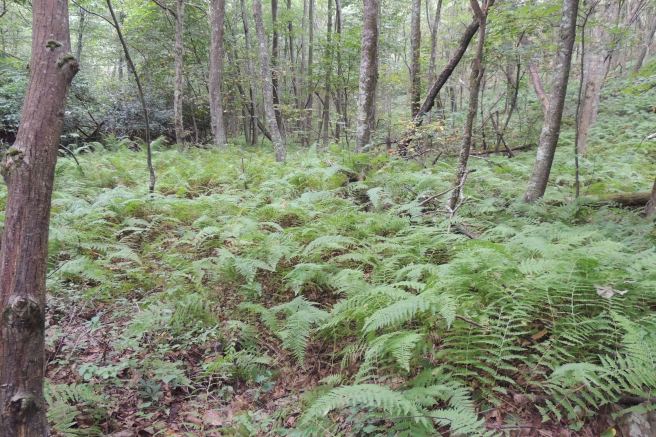 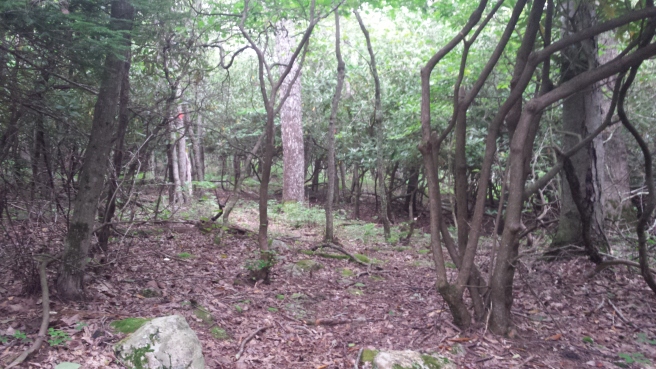 When we got to the turn around that connected us to the next trail, Rocky Ridge, we were expecting a view.  But quickly learned there were no vistas to be seen on this loop, which is probably why it is less traveled.

So we found a couple of rocks to perch upon, and had our much needed lunch.

Rocky Ridge lived up to its name and that’s all I’m going to say about that.

On the way down I decided to focus on mushrooms.  They aren’t flowers, they aren’t weeds, but they are a very pretty part of nature. 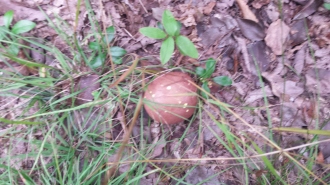 Just one little view from the Butternut Trail. 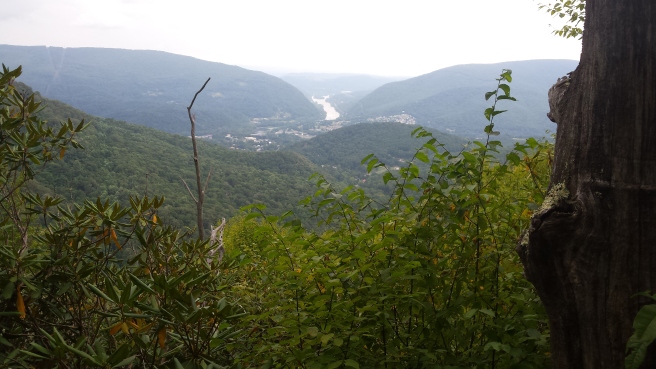 As you know, when I’m feeling good, I like to push myself – well, this hike provided quite a challenge to my now aching body.  It was 8 miles, 5 hours, and fairly strenuous.

But what else was I going to do on a Sunday??

After losing my hiking stick on my last hike, we drove to Hungry Mother State Park to purchase a new one (that’s where I got the first one and I wanted one just like it).  While we were there, we asked if our favorite cabin (#9) was available anytime in August and discovered it was indeed free the 21st – 23rd.  So we booked it as soon as we got home. We didn’t realize until later that the 21st was the solar eclipse, but what better place to view it than our favorite spot in Southwest Virginia.

We knew it was only going to be a partial eclipse (90% they said).  We found a secluded bench by the lake and proceeded to watch from start to finish, with proper glasses of course.  Sorry, no pictures, we wanted to just enjoy the moment.  The two most remarkable things (other than watching the sliver move around) was the drop in temperature, and how it remained so daylight.  I guess it was like having cloud cover, but it was different too, and I’m glad we got to experience it.

The next morning we went for a hike and lo and behold, we discovered there was one trail we had not yet tried. 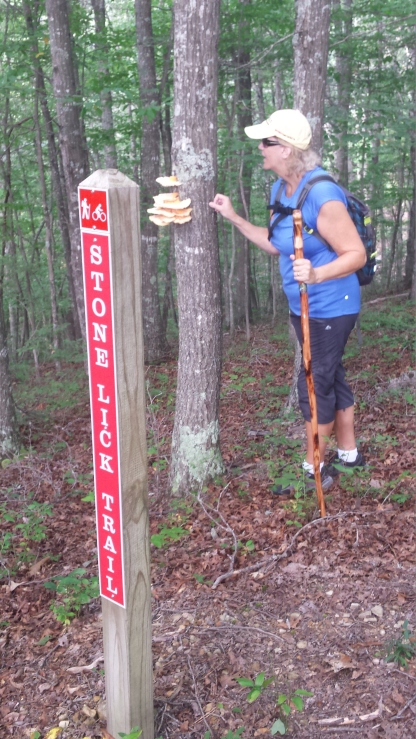 A little over a mile long, the Stone Lick Trail connects to the Clyburn Trail which we have been on, but we can now say we have hiked all possible trails at this park.  This was just over 4 miles total, but a great way to spend the morning and enjoy this great overlook.

Breaking in my new stick was easy and I was happy to be fully equipped again – at least temporarily. 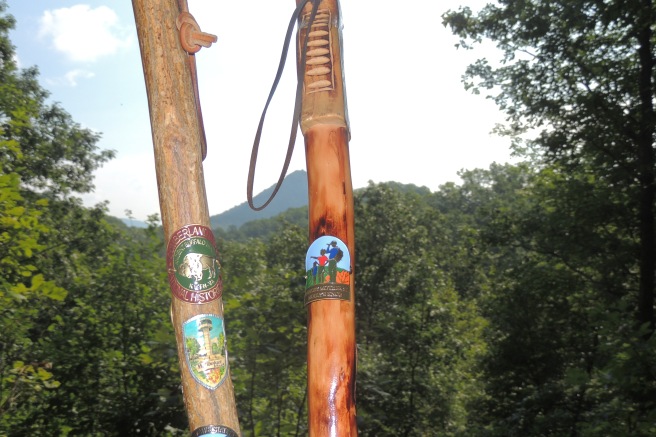 I already had the Hungry Mother medallions nailed on.

It seems that somewhere on the way down, the rubber tip had fallen off the end of my stick.  This important grip, keeps the stick from sliding (and consequently, me from slipping).  So I traced steps back a ways before giving up.  First time use, I was going to the front office to demand a refund!  Or at least file a complaint.

When we got to the office, a very nice Park Attendant was sympathetic but not very optimistic.  She suggested I look at the other sticks to see where it was made and possibly write to the company.  I checked them out, and as I turned around to ask her for something to write on, she had two rubber tips in her hand!  She said “I don’t know where these came from, but is this what you need?”  YES!  I greedily took one from her, thanked her, and vowed to triple glue it on.

That afternoon, we rented a tandem kayak and paddled all over the lake.  Then we jumped in the water and swam for a while before retreating to the cabin.

If you follow me, you know I love coming here and that it always makes me happy.  Here is why I think Hungry Mother is the best State Park in Virginia:

And it doesn’t hurt that it’s only an hour away, so I can go anytime I wish.

Here’s just a few pics from our cabin and the hike. 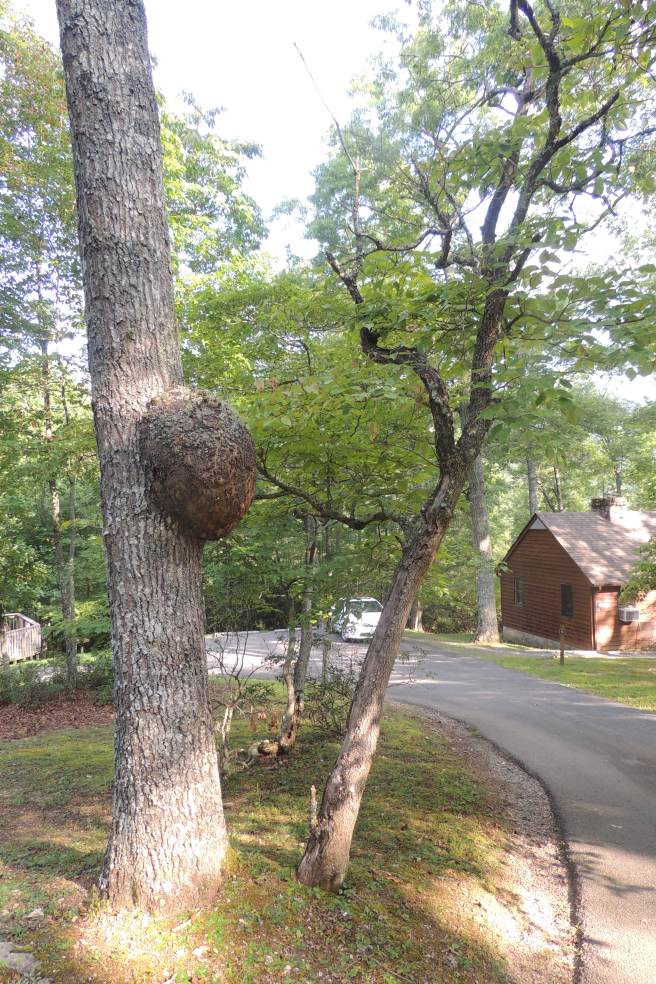 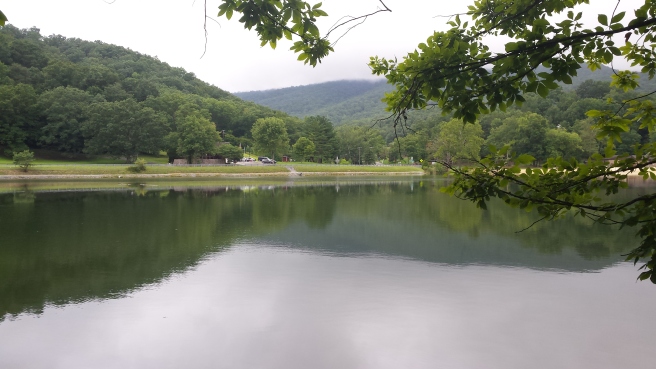 Oh yeah, and this little guy decided to join us on our porch. 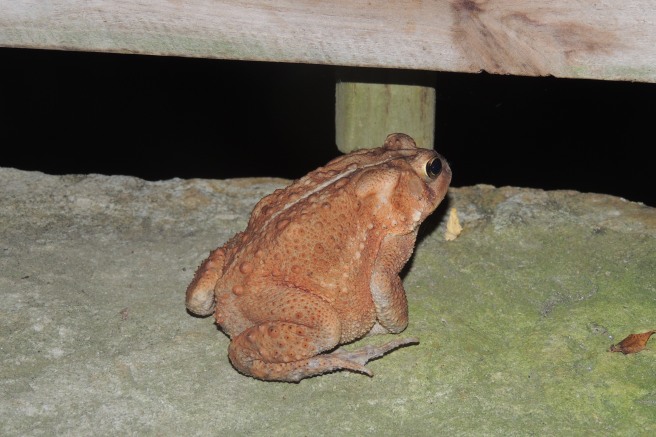 JG took the frog photo, I didn’t stick around long enough to be hospitable.  This nature-phobe was safely indoors!

What an exciting hike today!  So many things happened, where to start.  We got on the trail early, 9:00 a.m. (hey, that’s early for a Saturday).  We were at Mill Creek Falls in the town of Narrows, VA, about 50 minutes from home.

Starting out, we were the only car in the parking lot and we did not meet another hiker until we were about half way down.  I had tried this hike before, but it was after heavy rains and the creek crossings were such, that we turned around.  Today, it was fairly easy taking the 3 creek crossings.  However, this hike turned out to be a lot more than I bargained for – it was rocky, steep and at times narrow. 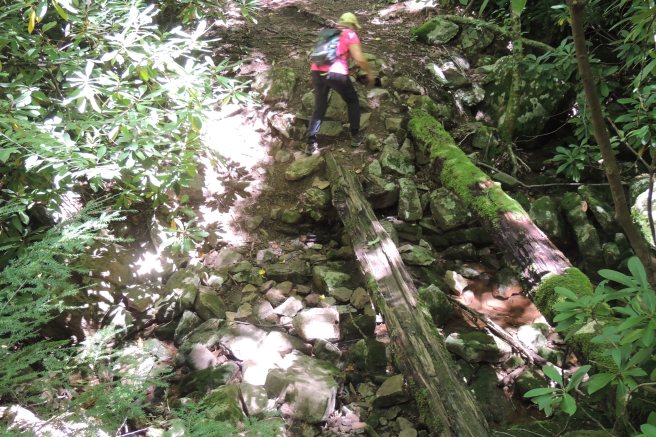 On the way up we ran into what we think was bear scat.  Not being experts on scat, we could be wrong.  And, since it didn’t look especially fresh (no steam rising) we were not too worried about it.

Just before we reached the top we heard voices coming toward us and looked up to see about 10 people riding horseback down the trail.  We were both shocked, that was about the last thing we expected to see.  I assume they went down a different trail than we had just come up, because some of those rocks were not easy to negotiate.

We made it to the top after a little over 2 hours and were delighted with the view of the town below.

We sat, enjoyed the view, and ate our sandwiches while resting our tired legs.  We were right under a power line. 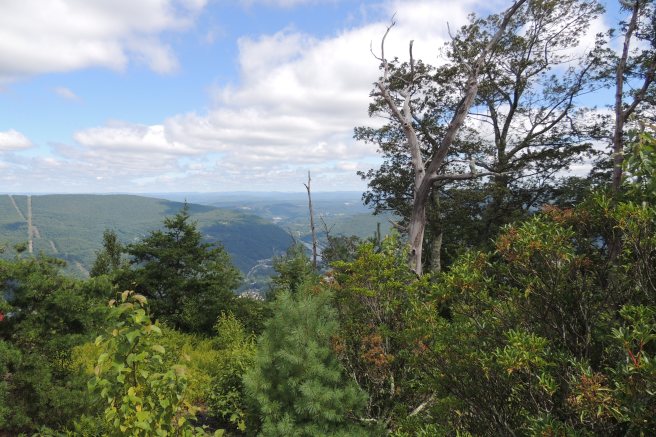 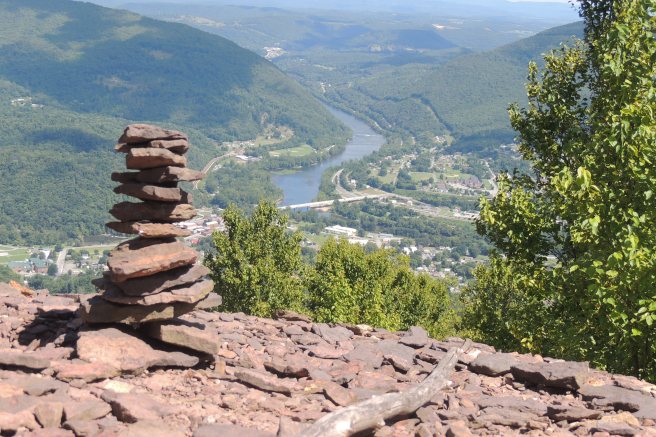 It was really nice to have the whole mountain top to ourselves.

Downhill is always a challenge for me, but we packed up and headed back down.

This doesn’t really capture how steep it was, but it does show the rocks which were loose and not just a little slippery.

As JG went off to check out a waterfall – I parked my hiking stick against a tree and got my water out for a much needed drink.  You know how sometimes you see something out of the corner of your eye and you want to stop it but you know you can’t?  Well, my stick had fallen and was starting to get away from me and all I could do was watch and scream “NOOOOOO!”  But it was too late.  Even though I could see where it landed, I knew I could not retrieve it without endangering myself.  JG said “At least it was your stick and not you!”  So I started thinking – at least it was my stick and not my cell, at least it was my stick and not my car keys, etc., you get the picture.  Stick is gone, I was sad.

We continued on, and all of a sudden we heard dogs barking.  About eight dogs came out of the woods and were going crazy.  They were hunting dogs and had GPS trackers on, and were not at all interested in us.  Then (not being a country gal) I started thinking they were out there to track some escaped convict or something! 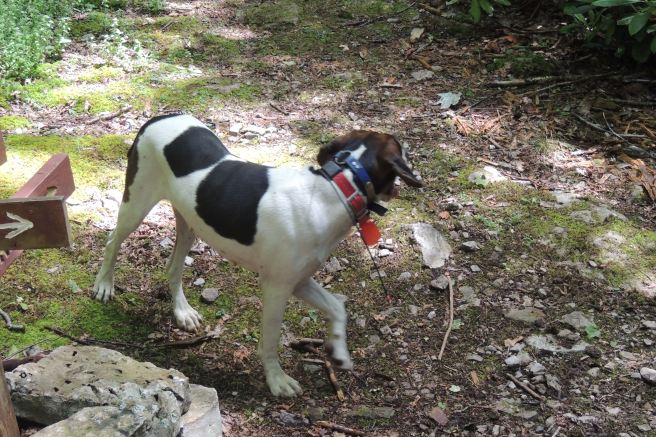 We soon encountered some fellow hikers who explained that they were coon dogs in training.  Whew!

Anyway, we continued down the rocky trail.

As we approached the parking lot, about 5 big trucks with kennels arrived, some were already filled with dogs.  We talked with the owners and they told us that the dogs had just tracked a bear from the top of the mountain, half way down and had him treed. Wait, what?!  We were just up there!  The dogs were just training, so they planned to call the dogs in and let the bear go.

You never know what’s going to happen on just an ordinary hike. 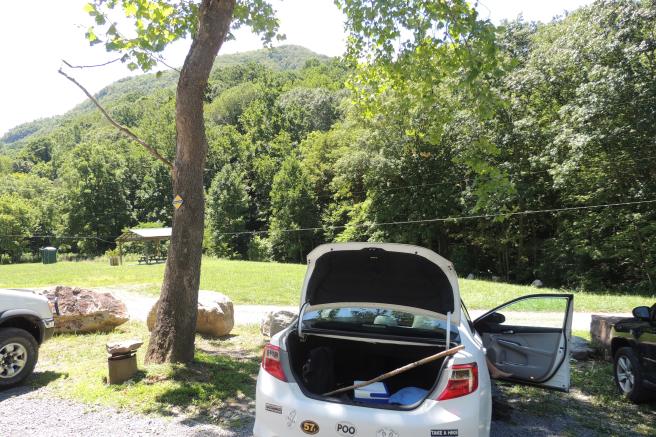 As we packed up the car, we took a picture of where we had just been – Yes the highest peak in the background – what an incredible day!

P.S. that’s JG’s stick in the trunk – he has promised to buy me a new one tomorrow.

It’s been a while since I went hiking with my retired friends.  First there were the body malfunctions, then the weather, then travel, etc.  But, Tuesday I was finally able to organize a long over due hike to Read Mountain Preserve.

It’s funny when you have been on a hike before and you only remember the good parts (I believe it’s called selective memory).  Sometimes things get lost in the details. Like what I thought I remembered as an easy 4 mile round trip, was in reality closer to six miles and more on the moderate level.  But we had a great time, great view and just general pleasure of being back out in the woods together. 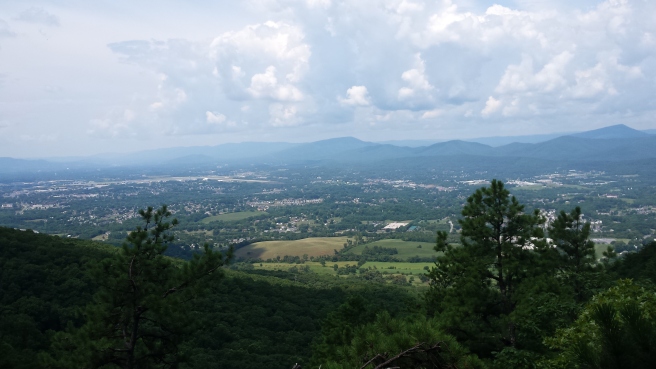 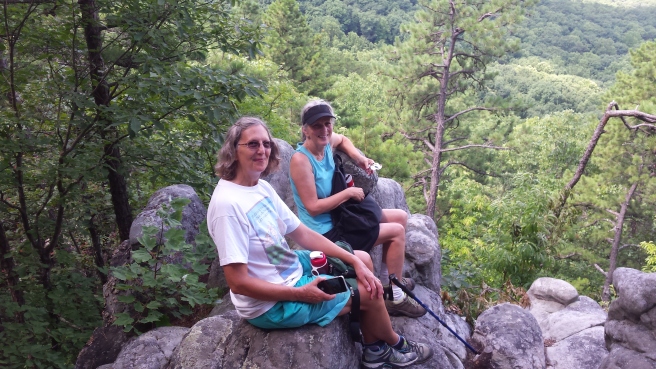 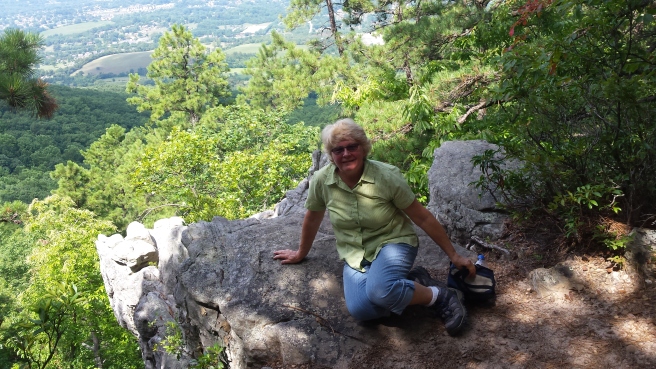 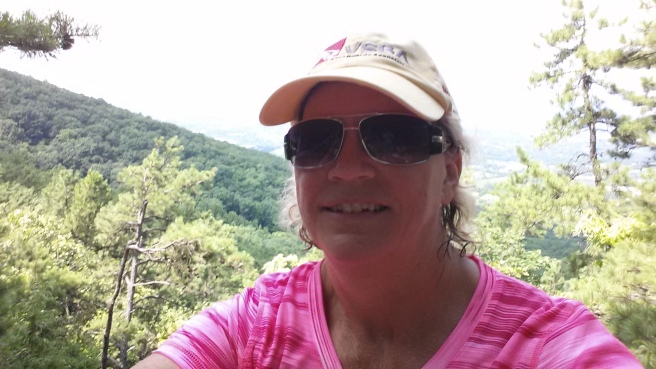 When my knees are screaming and my hips are aching, I just look at these happy faces and remember why it’s all worth it.

We hike for the pure joy of it.